“I wanna tell you three things…. about bugs”

Posted on June 7, 2018 by fleischerfamilyfarm

…..a direct quote, courtesy of Holden.

Thing one about bugs: Male honeybees don’t have stingers. Holden educated us on the matter as we all hovered around a honeybee whose services were no longer needed inside the hive.  (check our instagram for the video).  A few male bees are kept around to impregnate the queen and carry on the next generation, and that is their only role.  So he was ousted by the hard-working ladies and we all took turns petting the little bee, who was living out his last few minutes on earth in good company.  Have you ever had the chance to pet a honeybee? #farmlife

Thing two about bugs: praying mantises can grow in egg sacs that are kept warm by the 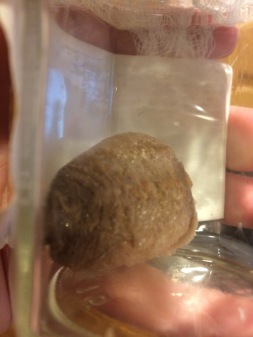 gentle hum of a refrigerator.  Yes, right now we have 3 jars of mantis pods on the top of our fridge, awaiting release onto the farm.  Each pod (image) holds between 150 and 200 little creatures that should be popping out any day now.  Being a pesticide- and herbicide-free operation means that you have to use the tools nature gives you.  You fight bad bugs with good bugs when they are invading your crops.  Mantises are extremely useful for the long term on organic farms because the babies eat soft-bodied invasive insects and the adults eat the larger hard-bodied ones.  And hopefully they will stick around because they are just fun to watch.

Thing three about bugs: there are currently not enough ladybugs to go around.  Every year we do a ladybug release because they keep the aphids at bay.  This is definitely one of the kids’ favorite things to do in the summer (Monroe just doesn’t know it yet).  But unfortunately this year it has been delayed because the company that we normally order from was unable to meet their numbers due to the changing climate.  Just to get real for a moment – we must not let ourselves think that climate change will be a problem for the next generation.  It is happening now and we are already feeling the subtle effects in our daily lives.  Ladybug procreation rates may seem insignificant but the ripples grow until before you know it you are fighting the government for water rights.  Ok I’ll get off my soapbox now….

Aside from all the bugs around here, we are getting very excited for the farm stand and CSA season to officially open in two weeks.  The selection is growing as we make more connections with other local farmers to beef up the weekly loot.  This will include such goodies as honey, fruit, and even locally roasted coffee!  Man, I really love coffee.

If you love us as much as I love coffee, please share our posts!  Until next time…

One Comment on ““I wanna tell you three things…. about bugs””

Seed starting season!
Nearly full for all three but we would love to have you join us!
One more night then we head home to the farm. This trip has been so important to us. We worked terribly hard and saved for a long time to be able to fully enjoy our time in Ireland.
Back by popular demand is the 3rd annual Fleischer Family Farm Summer Camp!
Mom’s really get shit done don’t they!?!?!?